English Cream Golden Retrievers Have A Lifespan Of 10

Many people think that English Cream goldens live longer than other types of goldens.

The more important thing to consider if you want a golden retriever whos likely to have a long, happy life is to find a quality breeder that breeds healthy dogs.

Like other types of Retriever, the English Cream Golden Retriever is at his happiest outdoors.

Nothing brings this breed more joy than a game of fetch with their favorite human- except maybe a cuddle at home afterward.

True to their heritage, these guys love to swim and are true waterdogs.

Consequently, owners should try to take these dogs to places where it is safe for them to swim.

On average, this breed needs around two walks each day, 30 minutes each in length. Try to keep these walks varied to keep their interest and prevent them from getting bored.

Although very good natured, like any other breed, they will grow bored if their exercise needs are not met .

It is important to understand the difference between American, English and Canadian Golden Retrievers.

While they are all descended from the same original bloodline, transatlantic breeding has caused slight variations in the breed and breed standards.

Despite their slightly different appearance, personality variations are uncommon, and all three bloodlines have similar temperaments.

English Cream Golden Retrievers have a broad head and body, but are the smallest of the three.

Standing between 20 and 22 inches, they are easy to spot with their round, dark eyes and generally lighter coats.

They Are Not Healthier Than Golden Retrievers 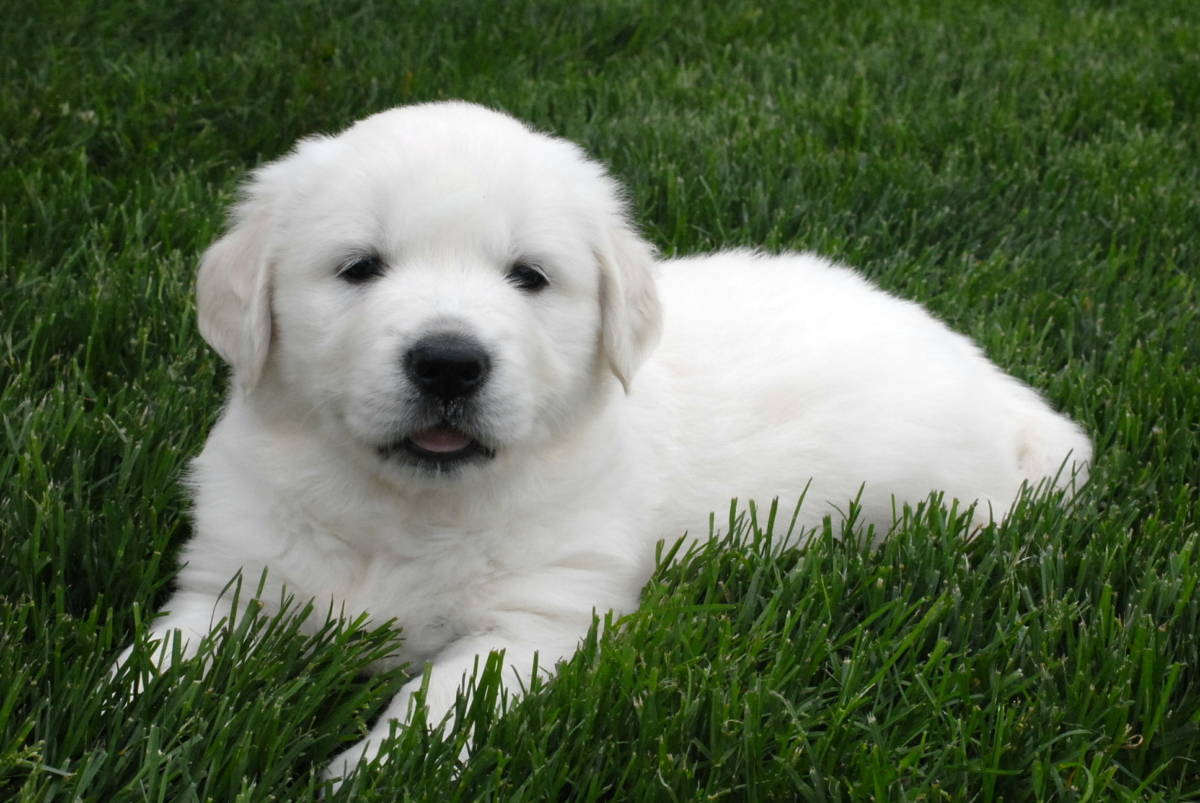 Some breeders will try and advertise these canines as healthier because of their cream color coat.

However, there is no evidence to support this.

Although it is thought to be less common in this breed hip and elbow dysplasia are frequently seen in this pooch.

As with other large dog breeds, hip dysplasia is a developmental condition caused by incorrect formation of the hip joint.

Generally speaking, the condition is genetic, but can also be triggered by obesity at a young age.

In most cases the condition can be managed with pain medication, but in more severe cases hip dysplasia may require surgery to correct.

They are also prone to Osteochondritis Dissecans. This is a condition whereby the cartilage separates from the bone.

It can occur anywhere within the body but is most commonly seen in the elbow, knee, shoulder or hip joints.

Retrievers are also known to have ongoing problems with their eyes and heart.

Conditions such as cataracts are often commonplace in the English Cream Golden Retriever, and although uncommon, it is not unheard of for this breed to develop heart issues such as Cardiomyopathy.

A survey completed in 2004 found that the three most common causes of death for the Golden Retriever were: various types of cancer, heart issues and old age.

Recommended Reading: How To Potty Train A Dog In An Apartment

English Cream Golden Retrievers Are Not From England

No, most English Cream goldens youll find in America are not from England.

All golden retrievers originated from Scotland in the mid-1800s when Lord Tweedmouth bred a Tweed water spaniel and a yellow wavy-coated retriever.

Most American breeders of these goldens either breed dogs from here in the States or import their dogs from all over the world, including:

So how did English Cream goldens get their misleading name?

According to Bev Brown, the Kennel Club and the Golden Retriever Club, were the first ones to write up the breed standard.

And in the early 1900s, all dog shows in Britain were held in England.

So in America, we called the champions of those dog shows, English Champions.

The English seems to have stuck with goldens that look like the English champions in those days, so 100 years later were calling them English Cream Golden Retrievers.

The English creams are excellent pets and make amazing companions to people of all ages and families with small children. Affectionate, gentle, and fun-loving, these dogs get along with everyone and like to be involved in all family activities. They also get along with other pets and will enjoy having someone to keep them company while you arent around.

Please note, although they like children and are exceptionally gentle, English creams are large dogs. They can easily knock a small child in the heat of a play session accidentally. To avoid accidents of this sort, never leave young children unsupervised with your dog.

English Cream goldens have beautiful coats, but they do require lots of care and grooming.

Youll need to brush them several times per week and bathe them 1-2 times per month, depending on if they swim or play outside a lot.

In addition to their coats, youll need to regularly brush their teeth, trim their nails, take care of their paws, and clean their ears.

Our cream colored golden retriever puppies come from a multi-champion bloodline and are from only the finest breeders in the world. In fact, the father of one of our dogs has been honored for being one of the top stud dogs in Europe!

Our dogs are 100% European and white as snow. They have their AKC papers and they are loved immensely by our entire family. We believe that healthy, happy dogs will produce healthy, happy puppies. Our family also believes that hard work and responsibility are an important part of raising these beautiful treasures. We count it a joy and privilege to have such beautiful and amazing dogs.

If you ask your friends what their favourite breed of dog is, theres a one in three chance that they will say its the White Golden Retriever. This is because the Golden Retriever is the third most commonly kept pet dog according to the American Kennel Club.

Golden retrievers are a cross between Tweed Water Spaniels with the wavy coated retriever.

As stated many times, there is no such thing as an English Cream Golden Retriever. There is a lighter-colored coat found on many Golden Retrievers, and while this means theyll never make a top show dog, it doesnt prevent them from being possibly the most fantastic family dog youll ever own.

If youre attracted specifically to the lighter-colored coat, then shop around with care, and ensure that the breeder you use is responsible, honest, and not trying to sell you something that does not exist.

With minimal training and lots of play and exercise, you will have a deliriously happy dog who will do all he can to keep his family happy. Keep treats to a minimum and pay attention to the quantity of food you provide he will never let you know that he is full. Be prepared for shedding and a dog who wants to be with you at all times. And expect to have a dog who will love you with every fiber of his being!

Also Check: What Kind Of Grooming Does A Golden Retriever Need

What Is A Platinum Retriever

While similar, these two types of golden retrievers are slightly different. Platinum retrievers have a pale coat, stockier built, bigger head, and rounder eyes. They are also calmer than American golden retrievers, but no less playful or fun-loving. 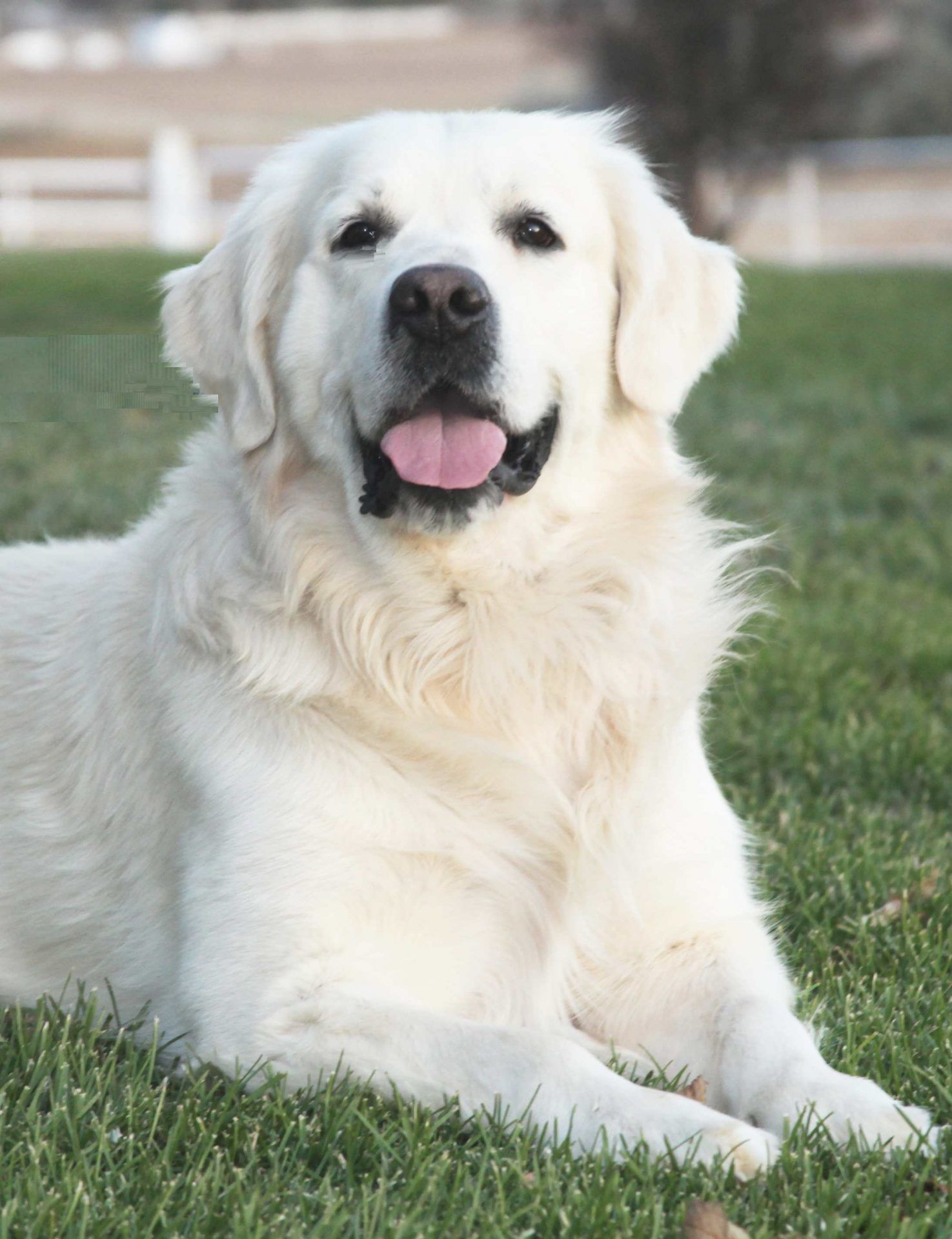 The average price of an English Cream Golden Retriever falls somewhere between $1,500 and $3,500. The price will be dependent on your location, supply and demand, breeder reputation, and the pups lineage. Some English Cream Goldens can fetch tens of thousands of dollars from highly regarded breeders.

Of course, budget is always an important consideration but never be tempted to work with a backstreet breeder. Its true that you get what you pay for. Reputable breeders care about the health of their pups, whereas puppy mills only care about profit. Health care is expensive, so they pump out as many puppies as they can without any concern for them or their mother.

Although golden retrievers may look like adults around one-year-old, mentally theyll still act like crazy, stubborn puppies until theyre about two or three.

These teenage years for dogs can be some of the toughest times for dog owners, but know that this is totally normal and will soon pass.

That being said, a lot of people say that golden retrievers are like playful puppies for life, so expect to have a lot of fun with your golden throughout their lifetime.

Getting a golden retriever puppy? Check out the Golden Retriever Puppy Handbook!

Golden Retrievers overall have an extensive range of coat colors within their breed. Their coats can range from very light and pale in color to rich gold, which almost looks red. There are also many shades in between.

Perhaps due to being described as undesirable, these English Cream Golden Retrievers are not as commonly found in America as in European Countries.

Opposing the AKC, the Kennel Club in the UK accepts any shade of gold or cream. Both Canada and Australia have similar standards in favor of cream shades as well.

There Is Only One Golden Retriever Breed

There is only one recognized breed of golden retriever, with many styles within the breed.

Yes, there may be some variability in appearance, energy levels, and even health , but theyre all golden retrievers and are more similar than they are different.

English Cream Golden Retrievers need not only physical exercise but also mental stimulation. These dogs were bred to work and therefore strive off of tasks and challenges.

A lot of aspects go into mentally stimulating your dog. Lets take a look at a few that you can try out.

Working for Their Food

English Cream Golden Retrievers used to hunt and therefore really enjoy working for their food. I recommend using something like the KONG Classic Dog Toy from Amazon.com. This product works by putting food inside of it. The only way your dog will get their kibble is by chewing and playing with their Kong until the kibble falls out a few at a time. Using the Kong will help slow down mealtime, burn off extra calories, and give your dog a stimulating activity to do at the same time.

An easy and affordable food game that can mentally stimulate your dog is hide-and-seek. All you need to do for this game is hide several bowls of their food around your house or garden and allow your dog to sniff them out and enjoy their meal.

Also Check: How Much Is A Golden Retriever German Shepherd Mix

The breed standards are different in the UK and in America.

So the UK is more accepting of shorter goldens, which is one of the common traits of English type goldens.

Is A Golden Retriever Right For You? Take This Quiz To Find Out!

After all these amazon facts, its time to bust some myths about Golden Retrievers. Goldies are unique dogs that come in a variety of colors and variations. Being the worlds third most common breed of pet dogs the Golden Retriever has a number of misconceptions that surround it.

In this article, we are going to bust some of the myths about Golden Retrievers. If you have your golden retriever snoozing next to you as you read this article be ready to be amazed.

Without further adieu lets bust some myths about Golden Retrievers.

You May Like: What Kind Of Grooming Does A Golden Retriever Need

How To Draw A Dog Golden Retriever

Will My Golden Retriever Protect Me

Golden Retriever For Sale In Nh